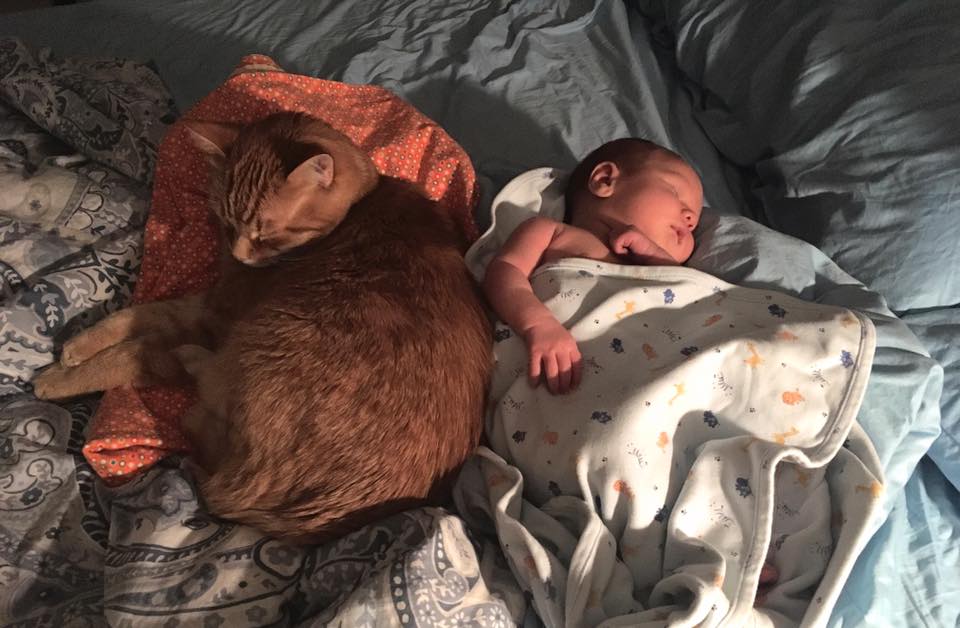 We lost our beloved cat Teddy this morning. He was such a friendly and social kitty, always wanted to be the center of attention. Teddy loved to lay and sleep on top of me since the day I adopted him when he was just a few weeks old. He also loved to be near Owen and lay on top of everything baby related from baby blankets to the change table. I’m grateful to have had Teddy’s company for eight full years.

The day started the same way as every other day since I came home from the hospital: wake up at 6:30am, nurse Owen, get started on my IV infusion and finish it by around 7:30. In the meantime Peter gets up to make coffee and feed the cats. It takes a while for me and Owen to get out of bed. When we did this morning, I found Teddy laying motionlessly in the middle of the living room floor. At first I thought he was napping. I asked Peter if Teddy was ok. “Yeah, he’s fine” he responded as he bent down to touch Teddy’s head. “Oh, no! He’s not fine” Peter then said in a panic. He took Owen as I kneeled down next to Teddy and touched his neck as if I was looking for a pulse. His fur still felt warm but his body was turning stiff. I called the vet before I was even able to emotionally register what had happened. Everything happened so suddenly and unexpectedly. Teddy seemed completely normal just moments before. There were no signs of illness. He stood up on his hind legs for his treats yesterday, laid on Owne’s baby blanket on the bed last night and even jumped onto the change table early this morning. When Peter went into the kitchen, he raced Ernie there to get his breakfast like his always did. I can’t find any signs of abnormality combing through all the details I can remember in the last few days.

The sound of Asturias played on classical guitar came through the phone as I was being put on hold. It transported me back to the days when I was in music school in Rochester, the place where Teddy became my fur baby. I had always loved kitties but never got as far as adopting one myself. When Rob’s friend’s cat had a litter of kittens, he took me there to see them. Teddy was the biggest cat out of the bunch and the most energetic. We took him home that day and named him Teddy a few days later because he was always hanging out with an oversized teddy bear I had at that time. He was the cutest little baby kitten, napping, playing, eating, and growing like a little champ. When I started working a couple of months later I noticed he was always meowing and following me around when I came home in the evenings. Figuring he was probably lonely, we went to a non-kill shelter and adopted Ernie. The two kitties happened to be the same color and age, although Teddy quickly outgrew Ernie and often ate from Ernie’s bowl. They each had its own distinct personality. Teddy was outgoing, curious, playful and quick tempered. He met everyone who came through the door with enthusiasm. Ernie, on the other hand, was more cautious, shy and calculated but once he warms up to people, he becomes very clingy. The two kitties played and snuggled together everyday. They were both very low maintenance. They easily adopted to every place we moved to, Rochester to Minnesota, to Illinois, to NYC and now NoVA. They’ve flown on planes, ridden on long car rides and Teddy had even been on a row boat. They made a place feel like home. It was such a joy to be around them.

Peter wrapped Teddy up in his favorite baby blanket, the one he has been laying on for the last two days, before we took him to the vet. We decided to have a private cremation for Teddy. He’ll come back to us in a cherry wood box so we can take him somewhere nice someday. The veterinarian said it must have been a heart condition. I can only take comfort in knowing that he didn’t suffer from a chronic illness. We both cried. There will not be another kitty like Teddy. We will miss him dearly. 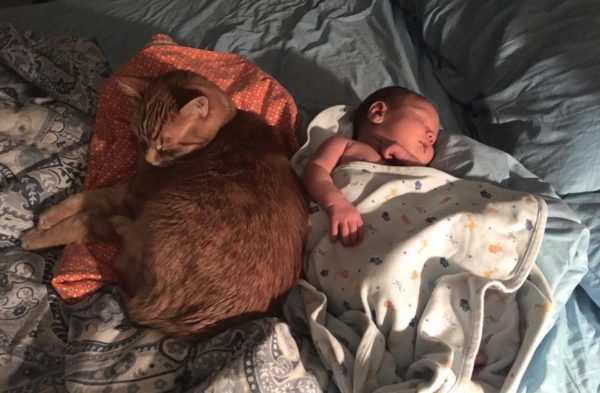