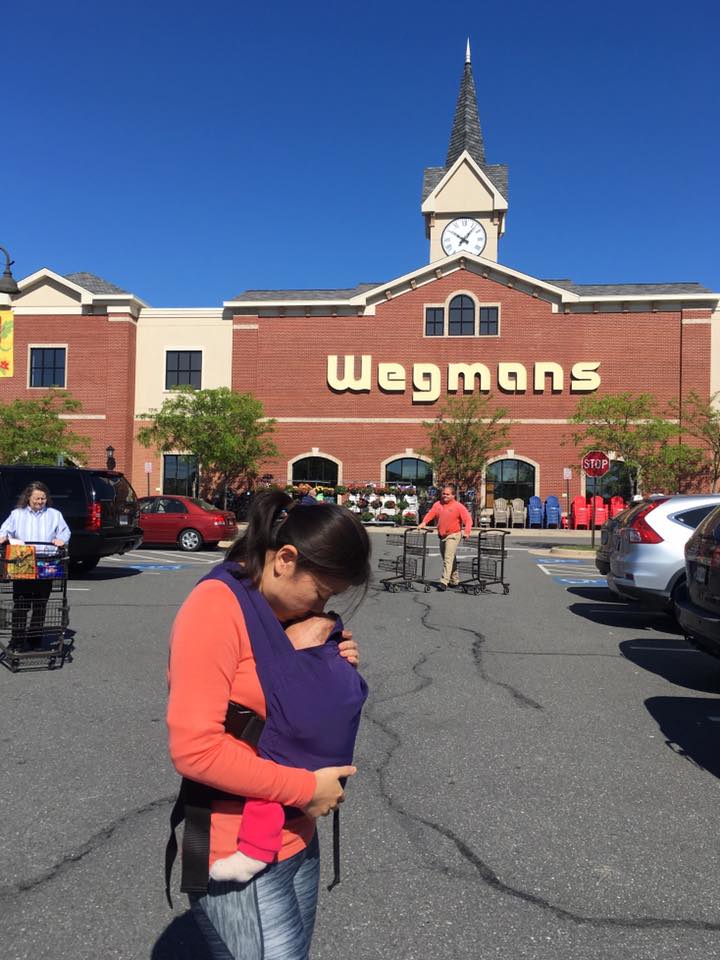 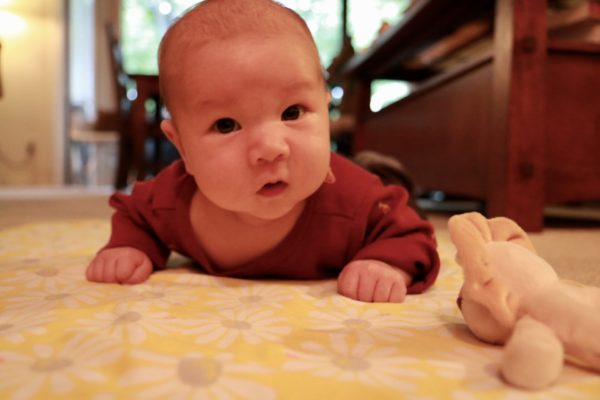 At ten weeks old, Owen is notably becoming more independent each day. Rather than having our days solely focused on nursing and napping, we can now spend more time playing and interacting with him. The little guy is able to entertain himself by focusing on objects, playing with his hands and putting things near his mouth. But that doesn’t mean he can just sit quietly by himself. At dinner tonight I noticed him crying out for daddy’s attention while laughing under his breath. He stopped crying as soon as Peter put him over the shoulder and resumed making noises when he was put back in his rocking chair. I knew he was faking it. A little cajoling made him give up his little laughter.

Making Owen smile is now our favorite pastime. I love to cover him with kisses and tickle his little cheeks. He responses to us with the cutest little baby voice in various tones. We joke about what language he is speaking. Was that a German word or a short sentence? Maybe he’s learning Swedish, or perhaps that vowel sounds more Danish? He is clearly starting to grasp the concept of call and response. And even though we talk of nothing, there is no other conversation more enjoyable to me now than baby babble. 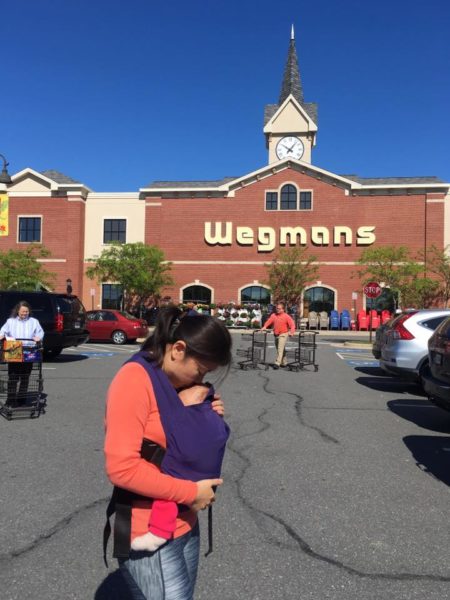 Spending less time nursing is also making our daily activities easier. Owen and I can join Peter on trips to the grocery store rather than being stuck at home all of the time. He didn’t at all freak out in the car the last couple of times we drove. With all the walks we’ve done on the neighborhood trails, I feel completely comfortable wearing and nursing him in the store in a carrier.

Owen also seems to enjoy going to the stores. It’s adorable how he insists on looking out from the carrier. He particularly enjoys to look at all the colorful flower bouquets. Frankly, he is fascinated by just about anything. His eyes light up as we walk down the store isles. It occurred to me stores are actually great places for a baby to see things, like a little museum.

We went to Wegmans on Monday without a feeding for nearly two hours. When he started to cry on the way back we pulled over in a parking lot to nurse him. We were already running late for my weekly PICC line appointment but neither of us was willing to listen to him scream for another twenty minutes before we get home. I kept my eyes on the time and nursed him for eight minutes. Surprisingly, that was enough to keep him quite for the rest of the way home. Yesterday we went to another store and stopped by an Indian restaurant for lunch without any protest from Owen.

There is no question that Owen is growing, everyday in every way. To grow is to change; to change is to be reminded of our impermanence.

Dear Owen, you may or may not want to or can be a parent one day, but I wish you the joy of seeing a child grow.

Is not impermanence the very fragrance of our days?

Flare up like flame
and make big shadows I can move in.

Let everything happen to you: beauty and terror.
Just keep going. No feeling is final.
Don’t let yourself lose me.

Nearby is the country they call life.
You will know it by its seriousness

Give me your hand.

No Sleep Until I’m With My Baby