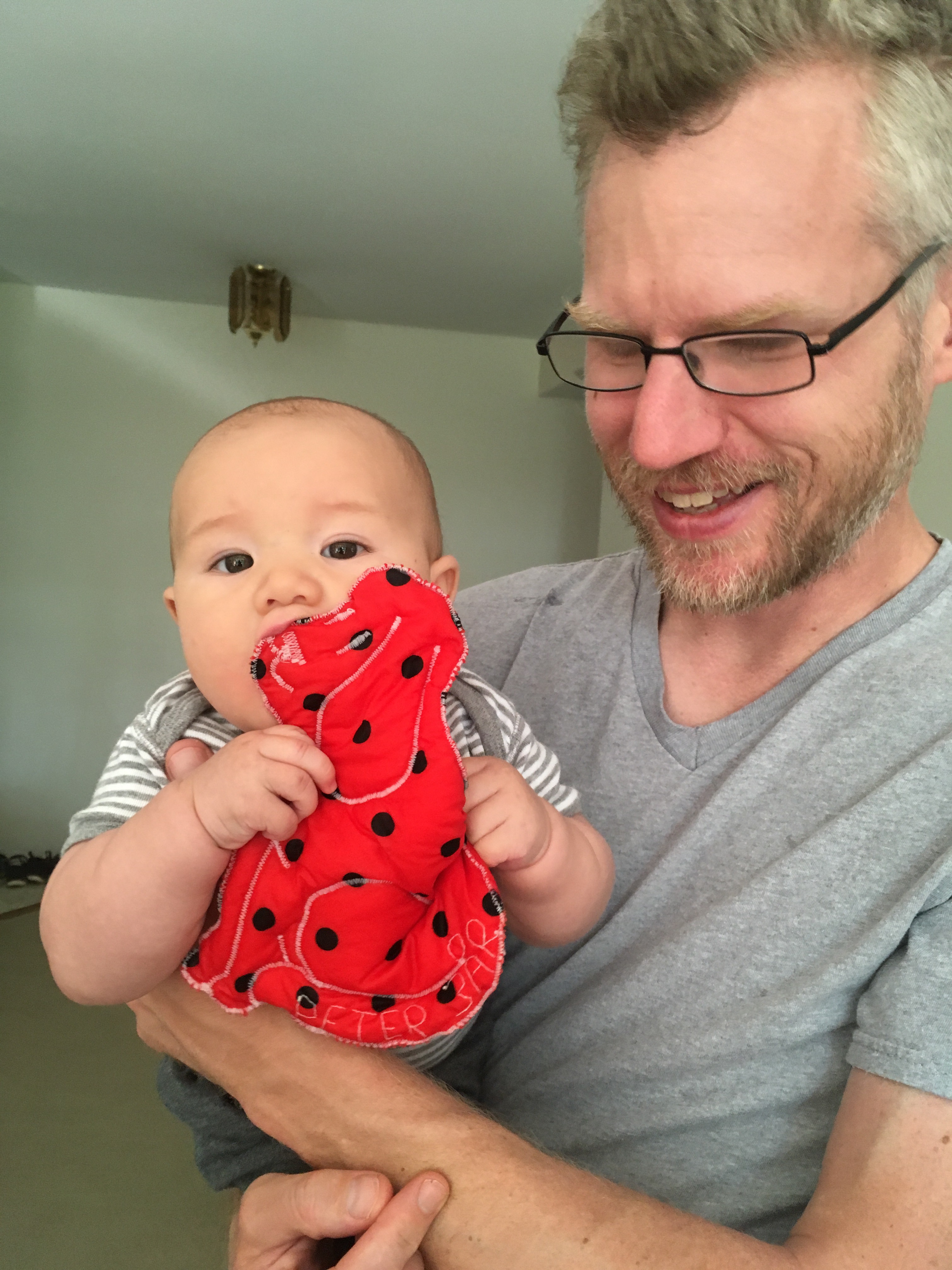 At four and half months old it is as if baby Owen is suddenly going through puberty! Instead of pimples he’s getting teeth. The bottom two are completely out now. No idea how soon the top two will come but something is clearly bothering him. He chews on his fingers quite a bit and has even found his thumb in the last couple of days! Some people swear by amber necklaces. To not miss out on any potential benefits I ordered one for Owen online like everyone else and put it around his leg. Owen is exclusive breastfed so no frozen fruits and veggies yet. I wet a little stuffed dog from Peter’s childhood and froze it for Owen to chew on. He seems to have enjoyed that for a few minutes.

Also like a teenager, the normally even tempered little guy is becoming a bit more rash and vocal. It is increasingly obvious that Owen is now developing desires outside of the breast and is no longer content with nursing. He is easily distracted by the world around him to a point where he is too busy to even have a full meal during the day. At first I was able to manage to get his attention back to the breast with a toy or a rainbow colored nursing necklace. Now he won’t settle at all in cradle position, much less latching and nursing. I learned not to push it after he bit me a few times when I tried to nurse him while he was distracted.

Most parents I know have nothing good to say about the so called “four months regression” when babies revert to newborn sleep pattern. I have no idea if there is such a thing or if Owen is in fact going through it.  It does seem harder to get him to sleep now and easier for him to wake up. Our place is small enough to not need a baby monitor. Whenever I hear any sound from the bedroom I would run in there to find the little guy flapping around on his belly as if he’s escaping from Alcatraz! Instead of panicking that no one is around, Owen is always looking around excitedly with a proud smile as if he just mastered a difficult skill for the first time (which he is! Just not for the first time but everything is so new to him and he’s just eager to practice his new skills over and over again). He’s so cute half the time I have a hard time comprehending that he’s really and he’s our baby!

It can be frustrating to have him wake up from a nap as soon as I put him down. More often than not he would look over to me with a big grin. Who can be mad at that face? As for the night wakes, I am just glad that he is up to nurse because it’s the only time he is not as distracted. He often stays half asleep through those sessions so there’s no fuss and no biting. Yes, I get a little less sleep that way, a little grumpy in the morning and have a whole lot of pain in my neck and back but none of that rivals with the joy of seeing my baby eat and sleep. My mom always said those are the two of the most happiest sights for moms and she is right.

In order to get Owen to eat and nap at all during the day I have resorted back to walking him around the apartment in a carrier. I remember this being the case before we left for Campo when he was 10-12 weeks old. It is the only thing that works. I’m glad about it since we’re once again gearing up for the road. It’s as if he’s signaling his readiness by demanding to be carried. Owen is now 16.4 pounds, nearly two pounds heavier in comparison to the beginning of the last trip. Yes he’s getting heavy and it’s getting harder but it brings me so much joy to be able to see his sweet face for every step of a hike.